I am pleased to announce that my second book, The Greco-Persian Wars: A Short History with Documents, is coming out in just a few days. This book tells the story of the wars between Greeks and the Persian Empire in the early fifth century BCE through translations of ancient documents. 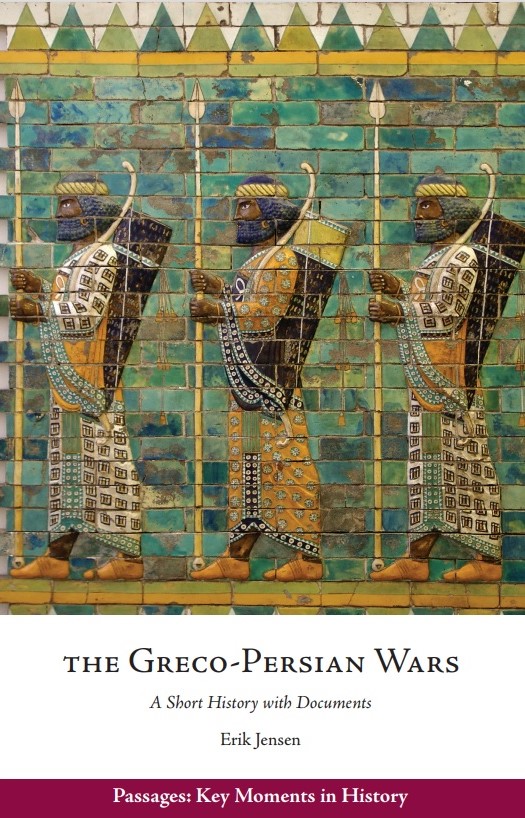 While the wars of the early fifth century in Greece dominate modern histories of Greco-Persian interaction, they were only part of a larger history in which the main actors were not Greeks but Persians, and whose events played out not simply in Greece but across the eastern Mediterranean. Looking at a broader history allows us to put the Greco-Persian Wars into a more meaningful context. The story of Persia’s engagement in Greece is not one of East-West cultural clashes or Greek ascendancy, but of Persia’s success in adapting to the challenges of an unstable, frequently violent frontier region, and that is the history my book explores.

This book features over eighty-five separate selections translated from Greek, Old Persian, Elamite, Akkadian, Hebrew, Aramaic, Egyptian, and Lycian, each with contextual notes. They are accompanied by a short historical introduction, a glossary, a chronology, maps, and a select bibliography.

Friendship and its complications

Relationships of xenia, or guest-friendship were a traditional way in which Greek aristocrats formed personal relationships across the boundaries of the polis. Similar relationships were also extended to Persians who dealt with the Greek frontier. While these relationships could be channels for diplomacy and political negotiation, they could also create conflicting loyalties. The exchange between the Spartan king Agesilaus—at that time ravaging the Persian-held territories in Ionia—and the satrap Pharnabazus in 395 or 394 BCE shows both the potentials of xenia and its dangers.

First they greeted each other and Pharnabazus held out his right hand. Agesilaus clasped it. Then Pharnabazus spoke first, since he was the elder.

“Aegsilaus, and you other Spartans here,” he said, “I became your friend and ally when you were fighting the Athenians. Not only did I support your fleet with money, but I myself fought alongside you on horseback and we drove your enemies into the sea together. You cannot accuse me of ever having played you false, like Tissaphernes. Yet despite this, you have now left my land in such a state that I cannot even feed myself, unless I gather up the scraps you leave behind like an animal. All the beautiful houses and woods full of trees and beasts that my father left me, which I used to enjoy so much, I now see either cut down or burned up. Well, if I don’t know what is righteous and just, you tell me how these are the acts of men who know how to repay favors.”

The thirty Spartans were ashamed and said nothing, but then after a time Agesilaus spoke up.

“Pharanbazus,” he said, “I think you understand that in the Greek cities, people also become guest-friends to one another. But when their cities go to war, such people fight on behalf of their homelands against their friends, and even kill them, if it should so happen. In the same way, since we are now at war with your king, we are compelled to treat everything of his as enemy territory. However, we would think it the best thing in the world to become your friends. Now, if it were a matter of throwing off the king to be ruled by us instead, I certainly would not advise it, but if you side with us now you will have the chance to flourish without having any master or humbling yourself to anyone. I think freedom is, after all, worth any amount of money. Even so, we are not urging that you should be free and poor. Rather, by taking us as your allies, you will increase your own power, not the king’s, and by subduing those who are now your fellow slaves you will make them your own subjects. You will become both free and rich—what else could you need to have perfect happiness?”

“In that case,” said Pharnabazus, “shall I tell you plainly what I will do?”

“That would be a good idea,” said Agesilaus.

“Well then,” he said, “if the king sends another general here and makes me subordinate to him, I will gladly become your friend and ally. On the other hand, if he gives the command to me, ambition is such a powerful force that I will fight you to the best of my ability.”

When he heard these words, Agesilaus grasped Pharnabazus’ hand and said:

“My dear friend, I hope you will be our ally! But know this: I will leave your territory now as quickly as I can, and in the future, even if the war continues, we will leave you and your land alone as long as we have other foes to fight.”

That was the end of the meeting, and Pharnabazus mounted up and rode away, but his son Parapita, a fine young man, stayed behind. He ran up to Agesilaus and said:

“Agesilaus, I make you my guest-friend.”

“For my part, I accept,” Agesilaus replied.

“Remember it,” said Parapita. He at once gave the beautiful javelin he was carrying to Agesilaus. In return, Agesilaus took a splendid decoration from the horse his secretary Idaeus was riding and gave it to Parapita. Then the young man leapt upon his horse and followed after his father.

The Greco-Persian Wars: A Short History with Documents comes out February 24th from Hackett Publishing.

You can pre-order directly from Hackett or on Amazon or Barnes and Noble, or from your local bookseller. For review copies, contact Hackett.